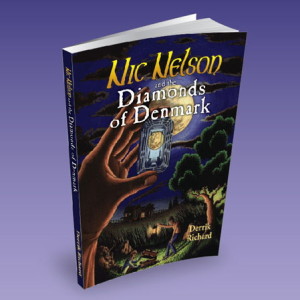 Nic Nelson and The Diamonds of Denmark is the story of a ten-year old boy whose tranquil world is suddenly shattered with the apparent accidental death of his father. Months later, Nic and his Mom find themselves in a new town with new challenges for Nic to face. At first, Nic is ignored by his classmates and hounded by the school bully when, by chance, he is befriended by a well meaning but goofy kid named Kevin Becker whose middle name is trouble. Through Kevin, Nic is accepted into a group of kids at school: Herbert Howell III, Cindy Lin, Dante Brown, and Philip Browning.

The action heats up when Nic and his new found friends, upon the completion of raking a neighbor’s yard, bump into two mysterious strangers who confront them. The men ask them strange questions concerning a suitcase and then abruptly disappear. Upon further facts, which come to light, the kids realize they have stumbled upon a twenty-year old diamond theft mystery. Their curiosity now inflamed, the kids decide to investigate further about what, why and where the Diamonds of Denmark are located and to the identity of the mysterious men.